Shall we “donate” Kashmir? 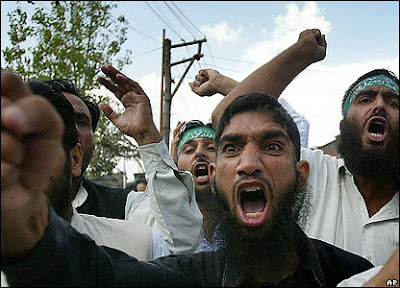 A lot of hungaama is happening in the name of Kashmir again. There are voices from within India which say we should donate Kashmir to the Kashmiris because they are more of a liability than an asset to us and doing this will be democratically right bringing us eternal peace. Sounds fine to me, just that I have a few questions about this proposal. They are:
1. If we make this donation, what part of Jammu and Kashmir will be donated? Will it be the whole of Jammu and Kashmir or just the Kashmir Valley? If it is just the Kashmir Valley, sounds digestable, but what if they want the whole of Jammu and Kashmir as the donation? Being the intolerant majority they are, what is the gurantee that they will not treat Jammu and Laddakh in the same way as they treated the Kashmiri Pundits in 1990, the treatment in this case being ethnic cleansing. So if we remove Indian Forces and Administration from Kashmir for the peace thingie, will the whole purpose not be defeated at the hands of the new genocide that will start?

2. On what grounds do we give Kashmir? On the basis of Kashmiriyat? How is Kashmiriyat incompatible with India? Further, if it is because of Kashmiriyat, will they gurantee that the Kashmiri Pandits will be able to return back to their homes and will be protected? I doubt. So whats the second excuse? Islam? Well how can a secular nation concede territory on the basis of religion? If that happens, will it not take away from the Muslims living in the “remaining India”, the moral right to stay in the nation anymore? That will be a great injustice to the Muslims of India, will it not be? Further, if it happens in the name of religion, will it not start the Balkanization of India?

3. More than 400 soldiers were killed in the Kargil War alone. I persume they died to defend Kashmir from the invading enemies. And when we talk of donating Kashmir, soaked with the blood of our soldiers, who are we going to donate it to ? To those swines (with due apologies to dogs who are atleast loyal to the hands that feed them) who pelt stones, abuse India and burn the Tri color in the steets of Sri Nagar on Friday afternoons even if something trivial happens in far away Netherlands? Where is our self respect?

Finally, it was mentioned that Kashmir is like a limb rotten with gangrene and should be amputated. With due respect I must say that Head is not a limb.

With that, I rest my case…