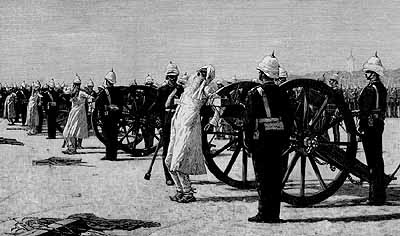 The revolt of 1857 is often called a revolt of the sepoys for petty reasons like greased cartidges, a mutiny without a clear sense of purpose, an effort immature in its ambitions and ambigious in character. In my humble opinion, the time has come to when we dissect such beliefs and theories and make up our mind on the true character of the revolt.

The next few paragraphs are the exerpts from a proclamation made by the Grandson of Mughal Emperor Bahadur Shah Jafar after the ‘liberation’ of Azamgarh. This may shed some light on what the rebels actually wanted to achieve through their ‘Great Revolt’.

————————————————————————————-
“The poople of India are keenly aware of the tyranny and oppression of the English. I, the grandson of Bahadur Shah, have come here to declare that we will rid India of the English and will liberate the poor people who are groaning under their iron rule. I present this proclamation, to all the people of India, so that they can understand the politics that the Badshahi Government will enact. This will bring reform and freedom to the people in the following five key areas.

India has been reeling from the heavy taxation the British have imposed on all the landed people of India, who in return tax the rest. I commit to lower the taxes, to preserve the dignity and honour of the people.

The English Government has monopolized the trade of all the fine and valuable goods that India manufactures. Products such as textiles, indigo and other articles that India has exported in the past are now a complete monopoly of the English. This leaves only the trade of trifles to the people, and even in this, they are not without their share of profits by means of high customs, stamps, and bureaucracy that is entrenched in limiting freedom in trade.

My government will abolish these fraudulent practices and open the trade of every article, without exception, both by land and water, to all Indian merchants. The Government will support this trade with steam-vessels and steam-carriages for their merchandise. Merchants with little or no capital of their own shall have access to capital at lower costs with the assistance of the government treasury as necessary.

Today, Indian officials in the British Government have a limited scope for growth – the highest level they can reach is that of a Subedar with a salary of no more than Rs 60 or 70 per month. All the Officers under the government will have starting salaries of Rs 200 to rs 300 per month with the promise of reaching higher levels in public service. Understandably, if they cannot publicly proclaim their support to ny government today – I ask them to help nt government indeirectly and help assist us to free India from the British.

The British economic policies have thrown India’s skilled workforce into a life of poverty. From weavers to cotton dressers, from carpenters to blacksmiths to shoemakers have all lost their livelihood under this oppressive rule of the British. Support us in this effort and help us to enjoy the fruits of our labor and economic freedom for eternal prosperity.

5. Personal Freedom
The British have imposed and forced Christianity upon us – Hindus and the Muslims alike. I urge the guardians of both faiths to join me in this effort to rid India of the British and create a nation that freely practices its faith and its culture.

—————————————————————————
The nature of any plan is evident from the dream behind it. Looking at what this young man from Delhi dreamt for an India post the British, is it fair to say that the revolt of 1857 was just a sepoy mutiny with no national character of its own and no ideology? Was it an attempt to deny the leadership of the revolt, the true status that they deserved?

Time we give the First War of Indian Independece, its due and know it for what it truely was – a revolution as good as the ones in France before and Russia later on…