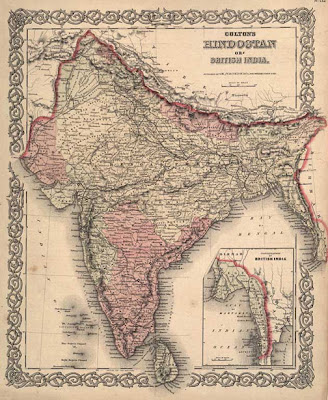 The belief that the British were instrumental in building a nation called India is often a result of looking at the concept of Nationalism from a Western Point of view and failing to look at the nebulous nature of the eternal entity that has been India. Unlike the modern nation states of Europe which took form in the 18th century, India was always a different setup. The current attempt of unification of Europe had already matured in India and China a millennium ago. Whether empires expanded or shrank, or their names changed with time, the concept of a common and unique identity which distinguishes an Indian with an Afghan, Turk or European was always there, this difference of character was the nation which India strived for.When it comes to political freedom, India had an enviable track record of a free nation which continued from 3000 BC to 1100 AD when some Northern kingdoms were subjugated by foreign invaders. Even if the Northern states were under the foreign rule, the rule of outsiders was never a bed of roses, the people resisted the foreign rule tooth and nail and there was never a period when some part was not up in rebellion. All this time, while the North was reeling under foreign invasions and occupation, the South not only remained free but also flourished. Barring a few exceptions, throughout the period, India was able to protect its ports, towns, trade centers and most importantly culture and free spirit.As the Mughal Empire breathed its last, the Marathas rose in prominence and knit India from Arcot to Attuck in a common thread, ruling as a proxy for the Mughal Emperor whose diktats ran not far from the boundaries of Delhi. They were almost at the verge of becoming the greatest force India had seen in centuries when their young empire was dealt a death blow first by Ahmad Shah Abdali and then the British. The real change appeared with the arrival of White pirate turned traders. Even as the Marathas were reeling under the impact of the Third battle of Panipat, the British started stealing their territories sometimes by military might and most often by hook and crook.The 19th century saw the decline of a great nation as never witnessed before. Like cancer, the British ate away in the economy, polity and culture of the country and made sure that even though they were to be driven off by the end of 1946, the scars they had left on the nation would continue to bleed for the decades to come. To understand the mentality that praises the British for contributing towards India, one would have to look at the analogy of a house owner who has been robbed of the last article he had in house. Now since the robber was so loaded with the goods, he had to leave his dagger in the house; and the robbed is happy that he atleast has a new dagger.
Print       Email

NEXT ARTICLE →
Total Revolution around the corner ? Can we see?

← PREVIOUS ARTICLE
Have we judged the revolt of 1857 failrly ?