The drama for Telangana- A belated response 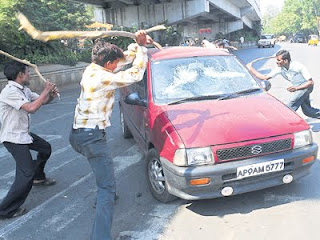 Someone wants to be a CM but finds that the competition is simply too much for him at the Capitol. So what does he do?

Unlike the great RT who went ahead and brought back the tested formula of 1960s, this gentleman decides that if he cannot be the CM of the state he is in currently, he must carve out one for himself. And what a better way to do it than go on an indefinite fast, the novel way of emotional blackmailing which flourished in a distant southern tip of the black continent about a century ago and has come a long way to become the Brahmastra of the Indian politics. We had one Neta who started his “indefinite” fast after the breakfast, ended it before the lunch after much hullabaloo. Well, this one at least, ran for days.

Can Mr. TRS claim responsibility for the anarchy and destruction which happened after his fast? His action reminds me of another “Direct Action” which resulted in not only the creation of a separate nation but caused destruction on a much bigger level. So was it that action which inspired TRS or was it just the desperation to get into power ASAP? Even god cannot read the mind of politicians, ordinary mortals like us can only make speculative guesses.

By the way, why is a new state needed? For development’s sake? Is development really dependent on how much fragmentation we are actually successful to bring to India? Take the instance of Bihar, what did it gain from a partition? Bihar was left penniless and the plunderers of Jharkhand started coming with a different block of surnames. Smaller states will not solve the problem, smarter states will do. If Mr. TRS is so bothered about the development of the Talengana area, he should have worked for it constructively instead of indulging in the Duryodhana kind of stubbornness he is displaying.

Center’s knee jerk reaction to the fast was even more disturbing. It made me doubt if this government even cares to show that it has a spine. It feels that they just do not care what happens to the goddamned nation! I wonder who we elected to power this time!

← PREVIOUS ARTICLE
Ruchika case -will we ever get justice for Shilpi Jain?