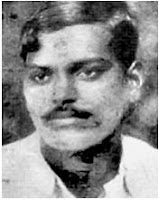 The tension is palpable as the gunshots refuse to cease. The young revolutionary realizes that he has only one bullet left in his pistol. He has been surrounded by the police from all sides and although three of them have already gone to meet the gods, thanks to his sharp shooting skills, they are still too many and too well armed. Time is running out. They are closing in and will very soon overpower him if he does not act fast. He is sad, not because everything seems to be over, but because he will not be able to achieve what he and his comrades had dreamed of for so long.

He gives a last look to his ‘Bamtulbukara’, his pistol as he lovingly calls it. This last bullet lying in wait in his pistol will redeem his freedom. He puts the pistol on his temple. The faces of his comrades flash past his eyes. He thinks of his mother whom he will never be able to see again. He thinks of another mother who is bound in chains, waiting for her sons to free her. The finger pulls the trigger….

… This post is not an obituary. This is a remembrance to that event and the man involved. He was just Twenty Five years old when he took his own life in preference for eternal freedom.

Today I write this post to salute Chandrashekhar Azad- who lived, and died free on this very day seventy eight years back!

NEXT ARTICLE →
Is this our biggest humiliation after the defeat of 1962?