Are Indians racist too ? 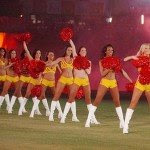 Calcutta, May 19: Two cheerleaders from London were asked to leave the ground at Mohali because of the colour of their skin by the Preity Zinta-hired event management company, Wizcraft International Entertainment, which handles her team, Kings XI Punjab.One of the girls, Ellesha Newton, told the journalists, It was okay when we reached the stadium. It was when we were going to take our positions that some of Wizcraft’s employees asked us to leave. We were surprised and asked them why and they told us it was because of the colour of our skin.When Shilpa Shetty faced racial abuse on the Big Brother reality TV show in the UK, angry reactions there, including censure by the media regulator, forced the broadcaster to issue a series of apologies.

With Ellesha and Sherinne, the roles have been reversed. The British would be watching to see how India handles the abuse handed to two of their girls. And we Indians should now think twice before calling others racists…

Do they really want to protect the Whistleblowers?

What after the Naxals are all gone ?