Print       Email
Long back in the 1960s, Mrs. Indira Gandhi, riding on the groundbreaking slogan of “Garibi Hataao”, became the Prime Minister of India. It will never be established how much “Garibi” was removed in those decades of the “Hindu rate of growth” but Garibi Hataao” remained the flagship of the elcetoral battle formation of the Congress in every election. The slogan slowly died a natural death when Corruption became institutionalized and the poverty of the nation and inflation became structural instead of being just monetary.
Today’s government is headed by an Economist, with another economist as the Home Minister and a Political Science Graduate as the Finance Minister! No wonder both the Home Policy and the Economic Policy look screwed up to a great extent. After the Anna debacle, the government could actally sense the Trust deficit that has been built up between the rulers and those who make them the rulers.
Maybe in this moment of difficult, the government rememberd that golden slogan of the 1960s coined by Mrs. Gandhi Senior. “If the talisman could work then, why would it not work now? “ – someone must have thought. And hence they decided to give it a try. 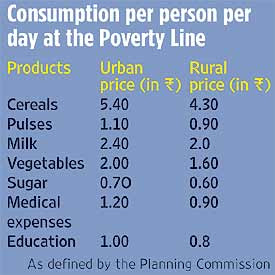 All went well, except a small mess up. They copied it alright but made a mistake with just one syllable of the slogan. So now instead of “Garibi Hatao”, it became “Garib Hatao”!
So what does this new slogan translate to? In one masterstroke, the esteemed policymakers of India have eradicated most of the poverty of the nation. How? Well, if you live in a city and you earn more than Rs 32 .00(yes 32!) a day, you are rich; and if its a village, then just Rs 25.00 is enough to shower you with the blessings of Goddess Lakshmi !!!
The public understood 6 months back that our government is a joke, but this new thing makes them a downright PJ !
I remember an excellent blog post by Shubham a few days back in his blog. That a new reality show should be started. 32 ka dum. In this show, ask all these members of the planning commission to survive on Rs 32 per day for a month. The Neta who lives till the end will be declared the winner. How good will it be?
Jokes apart, Dunno about others but am surprised this time instead of getting disgusted as usual. Are these the people who will guide India to Mission 2020? In that case India is better off on an Auto Pilot instead of bearing with these bunch of Jokers in Khaadi and Safaari suits!
Print       Email

NEXT ARTICLE →
Have we judged the revolt of 1857 failrly ?

← PREVIOUS ARTICLE
Shall we “donate” Kashmir?