A tight slap on the face of India, that is Bharat ! 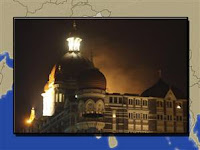 In all probabilities, I will be lynched to say this but this is something I must do. Yes, India has been slapped hard on face and we Indians can do nothing except smarting under the insult. When I was looking at the visuals showing the Tajmahal Hotel in flames, this was the exact thought in my mind- “this is the pride of India being gutted.” The attack on Mumbai is a taunt to India, that we are helpless. We are paying the price, of being complacent with enemies and acrimonious with our own brethren. They can see through the farce that is Indian security. India is a sitting duck and the “terrorists” have shown yet again that they can hit us anywhere, anytime they wish. We won’t retaliate because we are too spineless to do that.

The media will create a huge emotional storm making an average Indian choked over the sacrifice of the brave jawans, conveniently letting them forget that this attack on Mumbai is a huge Security scam. What was our intelligence doing,? How did the terrorists reach Mumbai via sea, where were the Coast Guard and the Navy? How did they manage to enter the supposedly high security hotels? Why was ATS and Mumbai Police so ill prepared even during the encounter- that saw Hawaldars crying in terror when fired upon and top officers lost at once? Will the politicians tell us frankly why they are so soft on Terror ?

Coming on politicians, I want to see what the self styled Saviors of Mumbai did to save it. I am waiting for Mr. R. R. Patil to give the “goli ka jawab goli se”. The man who was roaring in press and media after Rahul Raj was murdered, must have realized by now what real terrorism is and what real terrorists look like. This time they did not ask to be given a mobile phone to be able to call the Commissioner, they did not come with a “Katta”- they had satellite phones and AK-47s. Hope the Government, Politicians, ATS and people of Mumbai realize now who is their enemy and instead of persecuting fellow Indians, they try to combat terror (provided they can).

This anger has been seeping inside me bit by bit for past few months but now its unbearable., if I don’t cry out my heart will burst. Today, I am an angry Indian ! I want revenge ! I want an eye for an eye and do not care if the world goes blind. I may be a “Bimari” for Mumbai (as they say) and will never set foot there in all probabilities, but please , someone stop these terrorists from entering our Mumbai! Time is running out…

NEXT ARTICLE →
If Inspector M.C.Sharma would have been alive…..

← PREVIOUS ARTICLE
Is this our biggest humiliation after the defeat of 1962?