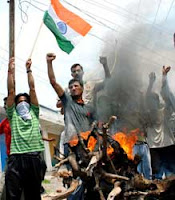 None should say Omar is not allowed in Jammu. Let him come, listen and speak. Like any other Indian should feel free to visit Kashmir or any other part of the nation. He is welcome to visit my home even if he denies me a piece of land in Kashmir. Why should a few words uttered by him make me change my Indian-ness? If he spoke in Parliament as a Muslim, asserting his Islamic identity, let denial of land to Hindus be his Islam and my Hinduness must keep my nation as a free democracy where difference of opinion is a natural phenomenon unlike Islamic countries.I had listened to Omar Abdullah when he was in Vajpayee’s cabinet and felt he had great potential to be an influential Indian leader. He spoke for India and brilliantly too. Now, if he has chosen to be just a regional one, it’s his choice.But he must stop to think why he can own a bungalow in Delhi or Bangalore and at the same time deny that privilege to a fellow Indian in Kashmir?Kashmiri Muslim leaders would like to enjoy the fruits and liberties of a Hindu majority democracy but vehemently deny that to Hindus in their area of influence. Why?When they are in a minority they crave and get special privileges. But once a majority, every single right to be at par is refused to other minorities.

It’s the same phenomenon all over the globe. A direct consequence of turning Wahabi. Wahabi intolerance and separatism is poisoning Muslim brotherhood too. A brilliant report in TOI elaborating how Wahabi elements are gaining ground in the small towns of Gujarat and the softer, humane version of Islam, the Bareilevi school, which is resisting their aggressive expansionism makes an interesting reading and gives a frightening picture of the inter-communal strife within Muslim society.

Kashmir is predominantly Sunni and Wahabi. Hence the intolerance that denies even the basic features of Kashmiriyat.

And see what the de-Indianised intellectuals wrote on the front pages in Delhi’s newspapers: “All over a piece of land!” Really?

Then why are the Indian soldiers defending a barren piece of dead snow in Siachen? Or what’s that piece of cloth known as the Tricolor? Is it worth dying for?

Jammu is witnessing a mass patriotic uprising, unprecedented till now. It’s a Second Ayodhya enveloped in the Tricolour outshining the 1952 Praja Parishad movement, which demanded one flag, one constitution and one head of the state. Dr Syama Prasad Mookerjee was martyred for this cause in the jail of Sheikh Abdullah, grandfather of Omar. The situation hasn’t changed in the last 56 years. It has in fact worsened.

Such a mass movement goes beyond the controls of any party or organisation. For the last 20 days, the roads are empty and markets closed. The sudden eruption of protests has seen grandfathers and grandsons and mothers and grandmothers ringing bells against Muslim separatism and shouting at the top of their voice: “Har har Mahadev”. Such a protest by every single member of families who had never come out for a public demonstration can’t be engineered. It’s an uprising, a spontaneous expression of anger accumulated in the last five decades of misrule by people of suspect loyalties. The Doctor’s Association, Bar Association and Govt. Employees Association, Sikhs, Gujjar-Bakkarwal Muslims and Congress MLAs defying their party, the Hotel Association and every single sect of Hindu society have joined and supported the movement.

One young man, Kuldeep Kumar Dogra, took his life in utter disgust after reciting a patriotic poem before the hunger strikers in Jammu. Policemen in plainclothes forcibly took his body away and tried to burn it in his village in the dead of night without even informing his family. A monk saw them burning the pyre with country-made liquor and used car tyres and managed to alert the villagers. The policemen ran away seeing the protesters swelling in number. And none of the human rightists raised a voice of dissent. Did the policemen belong to India or an enemy country?

In fact the whole movement is a revolt of Tricolour people against unpatriotic politics on Kashmir. It’s an effort to reclaim India in a region where the central leaders and regional parties have abandoned the idea of pan-Indian nationalism and geographical integration. India has been reducing every day in the valley and the seculars keep on counting their votes and encouraging separatists at the cost of an Indian identity.

NEXT ARTICLE →
Ruled by Scoundrels !